Around the first week in May, I was contemplating applying for a job. The job was semi-perfect. It’s here in Jacksonville. It’s at a university. However, it is a bit of a stretch for my field. The job is for reading education, and really I’m literacy and English Ed, but I was going to try for it anyway. Maybe. I kept going back and forth about it, mainly because I’ve learned the hard way (repeatedly) not to make myself fit into a job that’s not for me.

While I was stewing about the application, I got a call. It was from the editor’s assistant of a book where I have a chapter, All the Women in My Family Sing (which I’ve mentioned here before). She wanted to know if I would be willing to participate in a radio interview in Tampa. I could’ve sworn she said radio interview. But when she sent the information, it was for a television interview!

No matter what, my answer was yes because like I said, I rarely refuse opportunities. In that moment, I decided not to apply for the job. I took it as a sign that I shouldn’t be wasting my time fitting myself into another imperfect for me position. I should be preparing for something I’ve never done before, a prerecorded morning show interview! 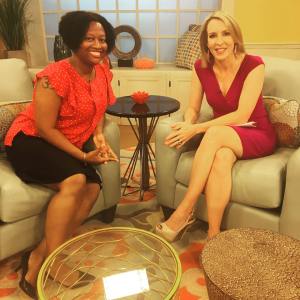 I drove nearly four hours on adrenaline and anxiety. Morning shows don’t give you questions ahead of time because they want you to naturally converse. So, from the night before, up until the host, Cyndi counted down, I was quite concerned about what we would discuss. Because it’s an anthology, it could’ve been about the book in general, my specific story, or how the other stories related to motherhood, because umm, it was a Mother’s Day episode.

Luckily, my goddaughter was there with me. We talked about other things, like the people in the green room and the process itself and that calmed my nerves.

During the interview, I learned a lot. I didn’t know that when they pan across the studio to other things going on, those things are actually going on while you’re talking! Like, there’s actually someone making waffles and another person creating little knick knacks and there’s even an audience! Sheesh! My nosey-ness kicked in high gear. But luckily there are editors and producers who cut away when I started staring at the waffles.

If you have four minutes to watch, then here it is: Daytime Interview.

I’m either becoming more of who I used to be or more of who I’m supposed to be. Either way, I’m feeling more at peace.
A celebrity memoir should do 3 things:
When you have a list of things to let go of, you need to do more than simply write them down and release them. You need to set that shit on fire! You need to purge.