For most aspects of my life, I can pinpoint the exact moment when I recognized a specific trait, but I’m unclear as to when I learned the idea that I should be perfect. After much research, it seems it could have come from four areas.

#1: It is common for adoptees to develop perfectionism out of insecurity and fear that they will be rejected from their adoptive family (Brodzinsky). This seems reasonable. I discovered I was an adoptee when I was around ten years old, and the story I remember was one of happenstance. Our home included several bookcases filled with books. On one of these bookcases was a book called Why Was I Adopted? I remember sitting cross-legged on the floor and reading the book in its entirety. When I reached the end, tears dropped one by one.

“Why are you crying?” my mother asked.

“I feel sorry for these people,” I said. “They don’t know who their family is.”

She and I never discussed the shock that this new information carried. We never discussed “adoption,” why she and my father adopted me, or what it meant to be an adoptee ever again. I’m not sure why, and as an adult and parent, I can only guess it’s because they didn’t know how or because of shame. Adoption carries its own stigma for all parties involved. Sometimes it can be embarrassing for the adoptive parents who, for whatever reason, cannot conceive their own biological children. Oftentimes, adoptees are ashamed and feel as if they were not good enough to have remained with their biological families, thus creating a sense that they need to achieve perfection, lest they be removed from this family, too.

This is something to which the child version of me could relate. As a child with no explanation, there was this idea that I must’ve caused my own adoption. If I were just good enough, then I wouldn’t have been given away.

#2: Perfectionism can also be developed when there’s a “frequent fear of insecurity or inadequacy” (Good Therapy); apparently, it’s something parents can unwittingly teach. I’ve written before about how my mother required me to sit for long periods of time to focus on a task until it was right. In a time of typewriters and correction fluid, this meant beginning my fifth-grade report on Ethiopia over and over, until it was error-free because “it was a reflection of me.” That’s just one example. Several other instances  reveal compounded experiences where I learned that flawlessness was a preferred behavior, not just from my mother, from other family members as well.

#3: “Excessive praise for your achievements” and “believing your self-worth is determined by your achievements” (Martin, 2018) can also lead to perfectionism. I was raised as an only child and was my maternal grandmother’s only grandchild for over twenty years. I was my paternal grandmother’s youngest grandchild. Being the only and the youngest means I was doted on quite a bit. Everything I did was not only praised, but it was always perfect. According to my family, everything I did was “the best.” You know what this breeds? An adult who frequently desires to achieve all the things all the time at peak perfection. It’s no wonder that, after receiving a terminal degree, my sense of ego was slowly deflated. I’d reached a pinnacle of success and there was nothing more to do to externally prove my worth. I had to determine how I’d live the remainder of life without doing something.

#4: A final idea is that mental health issues, like anxiety and obsessive-compulsive disorder (OCD) are associated with perfectionism (Good Therapy). I can’t say with confidence that I don’t have OCD. I mean making stringent lists that make me feel as if my world will crumble should I stray from them may qualify, but I don’t know. However, for me, anxiety definitely does align with perfectionism. But, it seems to be a chicken/egg scenario. Does a predisposition towards anxiety and OCD cause one to seek perfectionism or does perfectionism cause anxiety and OCD? For me, not fully feeling a sense of belonging in my adoptive family, feeling insecure about my origin story, and receiving excessive praise seemed to have fed anxiety.

Luckily, I’ve been reflecting on perfectionism in varied ways over the past six years. Next week, I’ll delve into how I’ve unlearned (and continue to unlearn) perfectionism. Until then, feel free to add to this discussion. Are you a perfectionist? Are you a recovering perfectionist? Do you know any perfectionists? We need to undo this harmful and unrealistic standard. None of us are perfect and none of us ever will be.

When we try to live life, it strategically sets us on an evolution of the following:

Those events began to shape my heart. I know that the word adopted is fundamental in my love language. Being an adoptee pushed me or taught me to appreciate who I am and to love who I am becoming. As love began to hit me in my adult life, I learned how to hone in on the pain and the feelings of rejection, albeit most times this reaction taught me to deny the why of everything. I know that when rejection hurts it can nudge, push and pull us in dark and undeniable places. I have learned that someone’s rejection of me is neither a detriment towards me, nor should it be an obstacle for me.

I am learning that God has prepared us and purposed our lives in such a way that there are no coincidences. Our choices place us on different paths other than what we ask for. Divorce happens. Love is hard. Life creates a ménage of events that leaves us breathless, yet we do not know what life will entail. We are incapable of learning and knowing without going through the process. Life leaves us faultless without a covering, healing is necessary.

Each wound teaches us a different way to love ourselves. Lessons teach us that we are not who we were, but we have become on a grander scale. We are evolving, all within understanding our feelings and emotions. As our faith deepens, our spirituality matures. Our way of thinking impedes upon us to do better, to be better and not to remain stuck in a painful way. It is our divine responsibility to take care of self, to love ourselves-to learn how to love ourselves.

God created us to create. God created us to love. His greatest commandment is to love one another as you love yourself. That I believe is one of the hardest mandates He gave. In order to love ourselves, we have to be aware of who we are. We have to know what makes us tick, how we are living this life is ever-growing, ever evolving-there is no mastery to loving oneself.

We do not come into this world knowing how so we allow the hurt, the pain, the wounds and the disappointment to redirect us into a whole other realm of loving, of living, of thinking. In order for us to love ourselves, which God requires. If I love myself, there isn’t any way that I am going to maliciously, purposely and with intent harm you. Learn to practice self-forgiveness on a daily basis. Do no harm. 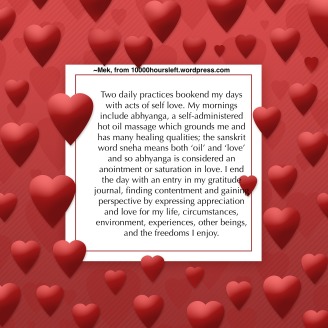 February 2018, I relinquished my blog to friends and family who answered one question: What is self-love? Each day revealed a different answer and these inspired others to evaluate, or re-evaluate how they defined the term. Thanks to those who participated!

This year, I’m asking for fourteen guest bloggers to answer another question: How did you learn the importance of self-love?

What is expected? Please send to me a nonfiction essay or piece of narrative nonfiction that describes/explains how you began to love yourself? What happened? Was it a mate who showed you what it should (or shouldn’t) look like? Did your parents instill the importance of self-love in you? Did a specific situation lead you to self-love? Was it something you were just born with? Poetry or fiction is not appropriate.

How long should this be? I follow the blogging rules of no more than 750 words. I also believe anything less than 500 words is too short, so let’s keep it between 500-800 words so people want to actually read what you wrote.

Where should you submit your writing? Please email me at kayg523@yahoo.com or use the contact form at the top of this blog.

Other formalities: Please include your social media contacts as well.

At the risk of sounding totally nutz, I’m sharing with you a letter I wrote to myself in 2014. I’d forgotten about it. And as I re-read the words, the whole experience seems surreal, almost as if someone else really did write this to me. This, along with many other things is what helped me make different choices about who I wanted to be in this world.

First, love yourself more. Self-love is very important. You’ve even quoted Whitney Houston on Valentine’s Day, “The greatest love of all is learning to love yourself.” Self-love is the most important thing that you can learn on this earth. The sooner you believe you deserve love from yourself, the sooner all other forms of love will shine and make sense. Loving yourself will help you feel more confident. Loving yourself will help you open up to the love of others, some of whom have been trying to love you with their whole hearts most of their lives.

Second, you are not perfect. No one is. Sure, you’re perfectly made the way that you are, but you are human, which means that you have flaws. Do not beat yourself up for these human ways. Everyone is born with something that is bound to make them feel bad or serve as a life lesson. You are not the only one with these imperfections. Accepting them will help you complete the first task, love yourself.

The third, and final thing I want to tell you dear heart is to listen to your instinct. Your inner-being knows what is best. You have feelings that alert you to when something doesn’t feel right. Listen to those feelings from now on. Ignoring them only makes for a more challenging time. And life here on earth is not intended to be that challenging. Remember, you create your experiences by the choices that you make. Make conscious and healthy choices for you, whether it be for relationships or for professional standing.

Happy Valentine’s Day! What would you advise your former or future self? 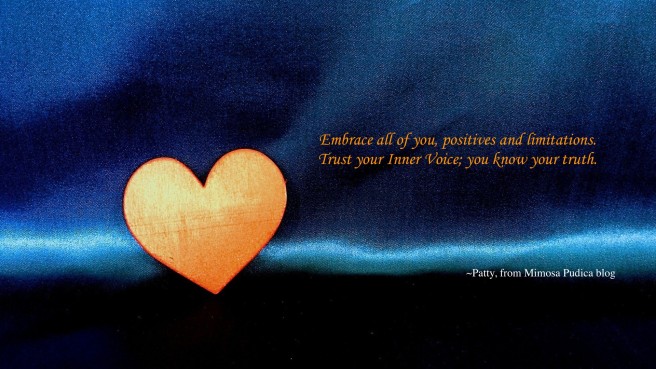 Today’s answer is short, sweet, and to the point, from my little sister friend, Ykeal Deborrie of Just One Thing blog:

Next to answer is JayBee, founding member of an award-winning book club, here in Jacksonville called, U.S.G.I.R.L.S. Follow her on Twitter to find out what the acronym stands for!