Trayvon Martin was shot on February 26, 2012. Over a year later, Jamie Foxx appeared at the BET Awards in a red t-shirt with the slain teenager’s hooded face. I thought his silent statement was brilliant, so I ordered one and wore it around Jacksonville, hoping to raise awareness and concern about the case. Two weeks later, his murderer was found not guilty of any charges. I tucked my folded t-shirt away and deemed wearing it ineffectual.

Then, Mike Brown was killed by a police officer and left to rot in the street on August 9, 2014. #BlackLivesMatter was active and I’d begun using it, in addition to #MichaelBrown. But the grand jury decided not to indict the officer.

A little over a year passed and Tamir Rice was gunned down by a police officer in a Cleveland park. I created a social media posts and included #BlackLivesMatter and #TamirRice. Later, I found out that Laquan McDonald was killed by a Chicago police officer around the same time, but the video wasn’t released. More posts. More hashtags.

The murders and associated hashtags rolled out quicker than I could grieve: #SayHerName, #JusticeForSandraBland, #BaltimoreUprising, #FreddieGray, #JamarClark, #PhilandoCastile occurred faster than I could post. And I began to wonder if hashtagging was enough. I mean, unarmed black people continued to be murdered whether I tweeted my anger or not.

Last month, a video of two white Georgia men seemingly hunting down a black, male jogger surfaced three months after the incident. #AhmaudArbery became popular, and because his birthday was May 8th, supporters ran 2.23 miles and posted #IRunWithAhmaudArbery.

Similar to when I wore my red t-shirt to raise awareness about Trayvon Martin eight years ago, I scrolled and wondered if this was enough to effect change. *Wouldn’t it be just a matter of time before another defenseless black person was killed?

But, what more could I do?

That’s when I asked my sister, Celeste Smith, co-founder of 1Hood Media and social justice activist to help me understand what would be impactful beyond posting a pithy saying and a hashtag.

Smith is an advocate of social media activism, but she agreed to provide additional ways that we can all be more active in our communities.

Vote, especially in local elections. Smith says voting is important. I mean we all saw what happened when African Americans rallied around one candidate for the 2008 and 2012 presidential election but voting for president isn’t the only office that’s imperative for our livelihood. Every aspect of American life is, in some way, shaped and governed by who represents us senatorially, congressionally, statewide, and locally. Who becomes sheriff and who is elected judge is important, especially when they are racist, anti-black, or represent racist ideals and can dictate how black citizens are policed.

Unify. Organize with likeminded individuals. Smith says, “Our greatest strength is our unity.” Organizations can be international, like Black Lives Matter, national, like the Players Coalition, or locally affiliated, such as the Color of Change in your city. Check the organization’s About page to see if it is aligned with your own core values. Organizations such as the ones listed are constantly and consistently supporting issues important for communities of black people. If this is where your interests lie, then there’s a place for you to help.

Support local activists. “You don’t have to be on the front line,” says Smith. “That ain’t everybody’s mission.” If you’re aware of an activist group in your area, then reach out to them online. Many times, their website lists ways that you can help. For example, Color of Change in my city is hosting an event to help “women returning to society from incarceration.” They are soliciting people who’d like to be a part of the host committee and all I have to do is complete a form. Perhaps, you don’t have time to devote in person. Smith says we should consider donating money or supplies or watching activists’ children. Connect with them and see what the activist needs.

While social media activism has its merits, such as garnering widespread awareness in a short amount of time, it is also important to be active in the in-between spaces. Voting, unifying, and supporting local activists are three ways to be involved before there’s an issue.

*I wrote this and planned to submit it to another platform a week before George Floyd was killed but held off and wrote Fire, instead. These days, I literally cannot write fast enough to inspire change.

It’s a great time to be African American. Just check your television listings. It’s like this:

I mean really. We have a well-rounded array of representation:

How to Get Away with Murder

A friend of mine called it a “renaissance of black culture.” I agreed. It sounds nice. Poetic. Artsy.  A “renaissance of black culture” makes me feel good, until the next unarmed black man is gunned down by police. I can laugh at the upper-middle class woes of the Johnsons, until the next #BlackLivesMatter call to action. I’m considering buying a bullet-hole hoodie like the Luke Cage characters. The satire hasn’t escaped me. I watch Annalise, her students and her clients get away with murder, just like the police in my country. I admire how Duvernay wove BMike’s art and his message about police brutality in the last Queen Sugar episode. And even though I loathe Empire, I’m glad there are actors who look like us on television to serve as entertainment, until someone chokes, shoots or hangs another person who looks like me in real life.

Yep. It’s a great time to be African American, as long as you’re on television.

Rodney L. Hurst Sr. has worked as a civil right activist for sixty-one years. His initial involvement with NAACP’s youth council led him to organize sit-ins at several downtown Jacksonville, Florida lunch counters during the 60s and 70s. The fight for equality and the subsequent and infamous Ax Handle Saturday are detailed in his memoir, It Was Never about a Hot Dog and a Coke®!

On May 26th Mr. Hurst and I discussed civil rights and advocacy. Unfortunately, his words are still timely.

KG:     Your book describes racial oppression and police brutality from decades ago. Has anything changed?

RH:     I mean based on what we’re seeing today, we had instances of police brutality years ago, back in the 50s and 60s. We did not have pictures and videos. So, it was your word against ours. And they were agents of the courts, and after all they were white. So, all of those complaints were dismissed. It didn’t make a difference what you said. This did not happen. As you see what’s happening in the news today, very little has changed from years ago. All of that is the same. But now, because of video cameras, pictures and telephones, people are beginning to capture some of those images.

KG:     What do you think people can do today other than take pictures and videos?

RH:     First of all, the civil rights movement does not change. It is a marathon in the ongoing journey. You have to do whatever you can, organized or not.

KG:     Do you think people believed the civil rights movement was over?

RH:     Sure. Because when the Voting Rights Act of 1965 passed and the Civil Rights Act of ’68 passed. Aha! You know? We can sit back and rest. And then here comes Nixon and the Southern Strategy after Goldwater.

KG:     Right. Especially, when it seems nothing’s going to happen.

RH:     If you feel like nothing is going to happen, and to get real philosophical, it’s just like living life…

RH:     Yeah. If everything’s so ordinary, nothing’s going to happen to me, then why live? The struggle and the fight are so simple. Basically, you’re saying I want the same thing you promised in the Constitution and the Declaration of Independence. Why is it that I have to deal with all of these things based on the hue of my skin? 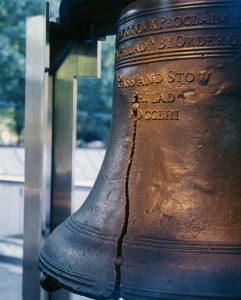 One of the first things I’m in favor of doing is called telling the history right and the inclusion of black people in history. When you pick up a history textbook and you cannot read about any of the contributions any of your ancestors made, the playing field is not even. Yet, I can pick up a history book and read about the contributions of white Americans and Europeans.

KG:     That’s a good point, but today, teachers have set textbooks and they’re dealing with almost zero autonomy. They have to be careful about what they teach, what they say, and how they say it. What would you say to them?

KG:     Do you think it’s a matter of being more courageous?

KG:     Do you think educators have to be courageous to teach the truth?

RH:     Maybe, if teaching the truth requires courage. If you feel inhibited and afraid to teach the truth, then yeah it takes courage. But when you don’t teach the truth, then how can you teach an honest American history? So if teaching dishonest American history is okay, and you can teach it with no pushback, then what happens to your integrity as a teacher when you know what you’re teaching is dishonest and incomplete?

KG:     What about non-teachers? What can they do? 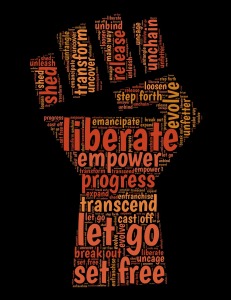 RH:     Sometimes you have to find out what works for you. A lot of my friends joined the youth council because everyone knew membership lists were not public. Many of them wanted to sit in, but their parents wouldn’t allow it. They did other things. They did not shop downtown.

RH:     Yes. Another example is a good friend of mine who’s a Quaker. To this day she does not eat table grapes because of Cesar Chavez and does not drink Coke products because Coke used to support the apartheid regime of South Africa. And that’s what she did, small things.

KG:     I appreciate you taking the time to talk to me. Is there anything else you’d like to add? 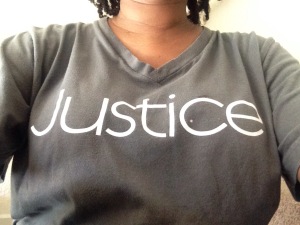 Whenever I wear this shirt, you should see the looks that I get. People gaze in amazement as if my name is George Zimmerman and I stood my ground against Trayvon Martin. They stare, eyes fixated on the word.

My dad saw me in this shirt and he just laughed. He understood.

“They probably look at you and say Justice, What?” He was right. That’s exactly what my father-in-law asked.

“Justice?” He questioned with his hands outstretched and face bewildered.

It’s justice for anyone. Justice for everyone. But no one else has asked. Instead, people glance and do double-takes, as if my name is Michael Dunn and I just murdered Jordan Davis, an unarmed Black boy who wouldn’t turn his music down.

People peer at the shirt as if the letters will change before their eyes. Maybe it reads Just ice, I imagine they’re thinking. But they never ask. Mostly, they gawk, like I was the cop who gunned down 12 year-old Tamir Rice on that cold Cleveland day. They whisper to their significant others as if I was the officer who shot Laquan McDonald 16 times in the middle of a Chicago street. Their glances speak volumes, as if it was me who kneeled on Eric Garner’s back and choked him to death on a New York city sidewalk. They glare at me as if I know what happened to Freddie Gray or Sandra Bland, two citizens found dead in police custody in Baltimore and Texas, respectively.

Accusatory eyes wonder if I assassinated John Crawford in the middle of WalMart as he shopped. Maybe they believe I know why Michael Brown was not only executed, but also left to rot in the sweltering Ferguson heat.

And I want to say, don’t look at me. I’m just wearing a T-shirt that shows what we all want. A T-shirt that reminds everyone what every American citizen is supposed to have.