Being a woman feels like being everything and nothing all at once.

It feels like being the gender who bears children, but not being the gender who is protected while bearing children. Because any country that allows Black, American Indian, and Alaska Native women to be two to three times more likely to die during childbirth demonstrates a woman’s value with each subsequent death.

It feels like choosing a lauded profession, like teaching, which in the United States is seventy-six percent woman dominated but not being heard, paid, or respected, while educating the nation’s children. Mississippi teachers, for example, are expected to live off of $45,574 per year. It’s no wonder eighteen percent of U.S. teachers work another job.

It feels like wanting to subscribe to a power higher than yourself, while signing up for your own oppression if you choose to worship with one of the top two religions. Eve is praised for being the mother of civilization, while being condemned for initiating the fall of man. A study showed that while there are ninety-three women in the Christian Bible, they speak a little over one percent of the time. This isn’t surprising as there are still seven religious groups that don’t allow women to be ordained; Islam is one of them. These may not seem like big deals, but implicit subjugation can be just as harmful because it is an indoctrination of subliminal messaging by which one may shape a future life.

It feels like living in India where the very idea of having a girl child is repulsive and unwelcomed, where throwing acid on women’s faces is such a common practice there’s a name for it. It’s called an acid attack. India leads the world in these intentional crimes against women. Likewise, women are more likely to suffer domestic abuse and rape, while the justice system oftentimes acquits their husbands.

It feels like the government regulating your reproductive rights for population control as they did with women in China from 1979 through 2015; it was called the one-child policy. And even though the Chinese government now encourages women to have up to two children, having a girl child oftentimes leads to infanticide and abandonment because boy children are preferred. Consequently, China’s demographics are now off balance; there are thirty million more men than women.

It feels like fearing one’s life in South Africa, where femicide, the intentional murder of women, is five times more than the global rate; in 2017, every eight hours a woman was killed…by her intimate partner. If a South African woman does live, then she is likely to be raped, as this country was once considered the rape capital of the world.

Yes, I’m convinced. Being a woman is like being everything and nothing all at once, like being the seed of civilization and the unintentional cause of your own damnation. At this point, I just have one request: Prove me wrong.

Happy International Women’s Day. We have work to do. 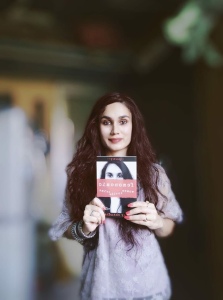 One of the best parts of blogging is meeting new people from around the world. This has been true for one woman I’ve followed, who is from India, Lovey Chaudhary. (Femonomic). I realized we shared similar ideas about women and social justice issues when she read and reviewed The Unhappy Wife four years ago. So, when she announced her book of poetry, Femonomic: Women Invite Crime, centered on raising people’s consciousness about how Indian women are (mis)treated, I was intrigued.

Poetry is sometimes stereotyped as flowery and light, but the poems found in this book are anything but. Although I knew Lovey’s background and stance, at first I was alarmed by how the book began. Titles like, “the fate of an unborn in womb” and “infanticide” introduce the reader to Indian culture where babies are murdered because they are not male children. But, I get it. The female species is undervalued at birth. The very idea of having a girl child is repulsive and unwelcomed. And, if girls are allowed to be born in this society, then poems like “acid attack cycle” demonstrate what could happen as they age. If you’re unfamiliar, then this link may provide background on this vile practice.

Another occurrence in this country is that crimes against women are rarely brought to justice because men continue to be in power in misogynistic and violent ways.

One of my favorite poems from her collection that shows the lack of consequence is “crime and punishment,” which I’ll share here:

one of many tainted times

the crime is not rewarded

with the retribution along the same lines

the archetypal excuses of the judiciary

are silently soaked in sanguine saccharine

about legal implications and sentence

how ailing it is for you to drink

three cups of justice and two latest of equality

to hydrate pages with some ink while righteousness await 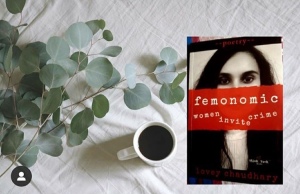 This poem speaks to me because of its universality. It demonstrates the injustices that many of us around the globe face. There doesn’t seem to be a real “justice system” for all, but rather a system that works for whomever is at the top of the power structure. I also think Chaudhary uses alliteration in a creative way. Silently soaked in sanguine saccharine sounds optimistic, especially because saccharine is sweet and sanguine can be positive, but the implication is that it isn’t. Injustices will continue as usual, not just for India, but for us all.

Chaudhary also asks rhetorical questions throughout, like this one, “Can the damage be undone for what our world has become” (p. 48).

This question and another poem, “plastic planet” is imperative for everyone. The Amazon fires and plastic floating in the ocean make me wonder the same thing. What can we do? Is it too late?

These poems are also inspirational. From self-love to anxiety, Chaudhary encourages the reader to get up and do more.

If you’re interested in poetry or any of the themes mentioned, then please purchase Femonomic: Women Invite Crime or follow her on these platforms:

What better place is there to go for an essayist who is constantly writing about relationships than the Museum of Broken Relationships?
If you’re in the #jacksonvillefl area, AND you’re getting your hair right for the summer, then book with my daughter @kwik.takedown
HAPPY BIRTHDAY to meeeee 🥳