Because I’m human, by June 2017, I’d forgotten to formally give in some systematic way. However, I’m happy to report that I was still service-minded…it was just more natural. 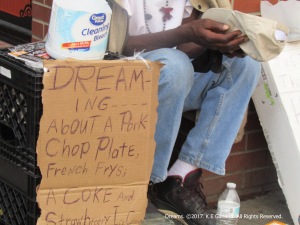 My goddaughter and I traveled to Nashville the second week in June. There, we hung out on Broad Street with a friend of mine who we’d visited. I’d noticed the homeless population almost immediately and the busyness of the area allowed me to take some candid shots. Well, one man wouldn’t let me take a photo, unless I gave him some money. How much was up to me. I paid $2.00 for a shot of his sign. This, however, isn’t it lol I must’ve deleted it. But this is representative of the types of signs we saw that day.

A couple days later, we rented a car and drove to Memphis to visit my cousin. Here, people party on the infamous Beale Street. The evening wore into morning and clubs began to close. People began to filter back into the street. This is when I met a guy in a wheelchair. He explained to me that it cost $7.00 to enter one of the Memphis shelters. He had one dollar, so I gave him six more. And just as I’ve written before, I didn’t worry about if he actually used the money for housing; that’s none of my business.

Later that morning, my cousin had a breakdown where she revealed her disappointment in our relationship. She’d been suppressing these feelings for a few years. From what I could tell, she wanted more of my money, time, and affection, seemingly in that order. A former part of me would have dug deep and matched her hurt feelings with my own. But I’ve lived long enough to know that doesn’t help. Instead, I hugged her and listened. Later that day, I maintained my own silence and thoughts. Don’t get me wrong. I was mad; however, I chose not to allow my anger to drown out her opinion. Furthermore, when we went to lunch, I also chose to pay for her meal as an act of kindness.

The lesson I learned for Christmas in June is that sometimes it’s good to just go with the flow and give when necessary or as you can. Additionally, I’ve learned to give without worry. Many times I’ve not wanted to give to the homeless because I might need that $2 or I don’t want to pay for someone’s food because I’ve already paid for the last five meals when we were together. But in a way, that’s the opposite of an abundant mindset. Giving this year has shown me that I always have enough. I have so much that I can give time, money and resources freely without stress. Isn’t that a wonderful thought?

Here is another reflection on how I maintained the Christmas spirit after Christmas.

The second thing I did was send people gifts (February). I began with my little sister friend’s birthday. I ordered Wandas from Two Dough Girls and had them delivered to her home. I also sent my little cousin a care package. She was completing her first year at my alma mater, Western Michigan University. I asked her what she wanted/needed and she sent me a list. Dwight and I added her requests to our groceries and shipped them off. If you’ve ever been away from home, then you understand how exciting it is to receive free snacks and toiletries. Her older sister didn’t need anything, so I sent her a handwritten card with well-wishes and a copy of my book.

This seems to be a simple way to show people that you’re thinking of them. Let me know if you try it. 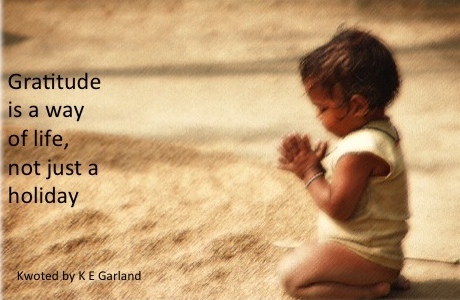 I learned one thing posting a single gratitude message to social media everyday.

There’s always something for which to be grateful. Period.

Wednesday, Talking Soup published an article I’d written about giving to the homeless. It can be found here: http://talkingsoup.com/soup-bowl/transient Hope you enjoy! And of course, feedback is always welcomed.