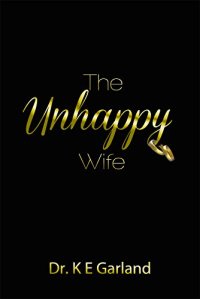 Crystal was the fourth woman that I’d interviewed. By the time I wrote her story, I had to admit that something metaphysical was happening whenever I began typing. I say this because I knew bits and pieces of her life with a drug-addicted husband, so I kind of already had a set beginning, middle and end for what I was going to write.  I assumed she was going to express regret for staying with him so long. Her interview was a technicality.

But she didn’t. Listening to Crystal, I realized that she saw her role as the person who never gave up on him. I had to write a love story about forgiveness and hope with unhappiness along the way.

How was I going to do that??? Were readers going to think I was condoning abuse and drug addiction? I decided it didn’t matter. I wrote the story she told me and allowed the narrative to unfold with metaphysical guidance.

Concept: The first thing I wanted to show was the pattern of drug addiction over the years, hence the episodes. The next thing that was important was to develop a sense of how drugs rule people’s lives. For Crytstal, each episode yielded a different phase in life: having a kidney transplant, delivering a baby, and going to college. But for 20 years, Tré focused on one thing, getting high.

The third part of the relationship I wanted to present is by episode five Crystal had decided there was nothing she could do about Tré’s habit. She realized the only person she could control and save was herself. She finished her undergraduate degree and secured a great position. She also raised her daughter. But she did these things all while remaining married.

Commentary: What’s the point? What is the point of being married to someone if you’re going to live separate lives? I thought marriage was a union, a coming together of two people because of love. Can you love someone and remain married to him, while watching him destroy his life? My husband says all the time, “You have to decide do I love this person exactly as he or she is, or do I love certain parts about him or her?”

There is a happy ending for Crystal and Tré. Crystal waited 20 years for it, but deliverance did occur. How many of us would be wiling to wait two decades for someone to get their life together and be the spouse we always wanted?

I’m not ignoring one important part to this story. Crystal’s mother kind of guilt tripped her when she first committed to Tré. She reminded her of all the other hobbies she’d given up on and basically told her that being married wasn’t a pastime.

I agree. But I think if Crystal’s mother would’ve known that Tré was an abusive drug addict, she might’ve given her different advice. Maybe.

What did you all think about Crystal and Tré? One of the Amazon reviewers said the she couldn’t understand why she stayed. Do you agree? Should she have left? Are concepts like forgiveness and grace just for religious books and spiritual leaders? Let me know what you think?

We’re coming to the end of this journey. Next week, we’ll discuss Veda, the last woman in the book and the Committed Wife section. Again, it’s never too late to order a copy of The Unhappy Wife. You can catch up on all of the commentary and add your thoughts whenever you can.

It’s easy to write opinions of life: no judgment, more compassion, allowing people to be themselves. However, it’s quite another to put those words into practice. Over the past few weeks, I’ve had ample opportunity to do just that. Kesi’s graduation brought family and friends into our space. The celebration offered me the chance to fine tune myself within specific relationships.

I’ve written before about how my mother-in-law rarely visits. Well, we invited her to come down for Kesi’s graduation, and to each of our surprise, she accepted the invitation.

I began to worry.

Will she judge any and everything as she has in the past? Will the house be pristine enough for her? I thought about all of the encounters we’d had where my sense of inadequacy overshadowed her presence. After a couple of weeks of fretting, something finally dawned on me. I have to allow her to be herself. If she judges the girls, our home, or me, then so what? I’m confident with who I am and it matters not what she or anyone else thinks.

The other shift I had to make was to recognize the year. It’s 2017. I needed to function with her the way we both are in this year, not 2008 when she called Kesi fat every day, and I held back from saying much. Not 2012 when she had to shorten her visit with us because she’d double-booked herself elsewhere. It’s 2017.

Once I made those two changes, I was a much calmer person ready to receive company.

We had a wonderful time. My in-laws and I picked Desi up from school early. We shopped for groceries. We laughed and talked about all sorts of things. It really was a pleasant time. My MIL helped me by cutting all the fruits and vegetables for the party. Ultimately, it was a pleasant visit. But I realized I still have a little growing to do.

“Don’t go in the house and clean everything up,” I ordered at eleven o’clock at night.

I shook my head, “Cause that’s what you’re about to go do.”

“You trying to stop people from being themselves again?” Dwight asked.

He was right. In that moment, I was doing it again, not allowing her to be her. After it was brought to my attention, I let it go. She cleaned all of the dishes and the kitchen. I went to sleep. And both of those actions were perfectly fine. 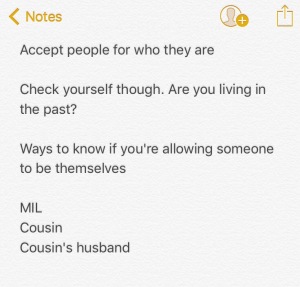 While I was functioning with my MIL in the present, my cousin’s husband, let’s call him Buddy, was interacting with me in the past.

Buddy has a history with crack-cocaine, drinking, and physical abuse. Because of this, Buddy hasn’t been welcomed in my home or around my family for over 20 years. He recently began rehab, so Dwight and I agreed that it was okay for him to re-enter our family’s functions.

Everything was going well. My cousins, Buddy, and I played Spades. He drank the Paul Masson Brandy that he’d brought. He devoured the case of Corona he’d lugged in. We laughed. We talked. They won the game.

The night wore on. A corner of brandy sat in the bottle. Three Coronas remained.

“You know I think God sent her to me,” he said pointing to his wife, “Without her, I wouldn’t have been able to make it.”

“I agree, Buddy. She’s the only one who could be with you.”

What did I say that for? Buddy went into a tirade.

“Kathy, you know you never did like me,” he started.

“That was the past. I thought we were cool now?”

“Naw. Naw. You never did like me,” he continued.

I don’t want to bore you with the rest of the story. Basically, I tried to convince him that it is 2017. He’s in rehab. We are getting along today, and that’s all that matters.

But that wasn’t all that mattered. He hobbled off to complain about my family and me to anyone else who would listen. About an hour later, he got into a verbal altercation with my aunt, his daughter, and his wife. His thirteen-year-old daughter’s eyes were beet red. Everyone’s lips were tight. Pursed.

His inebriation cut the thick silence, “YOU DON’T KNOW WHAT I’VE HAD TO DEAL WITH FROM THIS FAMILY!” he yelled.

And so there it was.

It didn’t matter how nice I was to him or how great of a time I thought we’d had that day. Buddy lived in a past of hurt and functioned from that past that weekend. I don’t want to ignore the fact that alcohol also exacerbated the situation. I’m not sure why he felt the need to get uncontrollably drunk. And I don’t want to guess.

There it is, one happy ending and one work in progress. But that’s how life is, right? Everything isn’t always tied up nicely with a bow. Flawed and traumatic relationships take time to heal. That’s just the nature of the human condition.

TOMORROW...3/3, at 7p EST, 6p CST, and 4p PST, I’ll be live on FB discussing my writer journey with @theakilahbrown
What better way to start #womenshistorymonth than to tell you about a book my dope women colleagues @cbeach717 @katiedredger @cathyjets and I have worked on for two years? Stories of Sports is available now. We’ve covered a range of diverse topics and the ways media have excluded or manipulated specific narratives. 2 chapters focus on the history of mistreatment of female athletes and sportscasters. We have a foreword from @andraya_carter and a glowing review from @shelbiewitte ✍🏽✍🏼✍🏼✍🏼
Night owls watch the moon rise and embrace their shadow side.