I had little control over my life, and I’d succumbed to the idea that I didn’t know what tomorrow would bring or how the next day’s unknown events may disrupt whatever today’s new normal was, kind of like now.

So, in between finishing high school, working at a bank as a 10-key data entry clerk, and messing around with my new boyfriend, I read.

I read Stephen King novels. There was something about reading scary-ass narratives that could never happen to me that was more comforting than reality.

Misery helped me focus on a crazy nurse, who held her favorite writer hostage and tormented him.

Firestarter swept me away to unbelievable events centered on a father and daughter who’d gained telepathic powers and the ability to set fires.

The Dark Half is a little harder to explain, but let’s just say reading about a fictional author with dissociative disorder was captivating and kept my mind on other things, kind of like now. 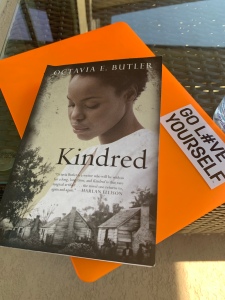 I’m always reading, but lately, I’ve  been reading more, faster. I started Octavia Butler’s Kindred right at the beginning of our country’s serious discussion of the pandemic and finished it just as Florida’s restaurants were mandated to do take-out only, about two weeks.

Right after, I was compelled to find another book. As I’m writing this, I’ve decided on Jasmine Guillory’s The Proposal. It’s a light read that shelters me from 24-hour news cycles and fear-based social media updates.

Unlike when I was seventeen, I’m not burying my head in the sand. I’m fully aware of how I feel and what’s going. I sense the world’s pulse. But I’ve easily slipped into a coping mechanism and I wonder if that’s the way we all function.

Hoarders hoard and fearmongers spread fear because they’ve been triggered. Folks who call others “dumb” and “stupid” for attending Mardi Gras or other group activities may be repeating phrases spoken to them during their childhoods. Like me, they’ve been here before on a smaller scale, but maybe they’ve not been able to process their emotions to understand other ways to function. Being triggered is a thing that’s real, inherent.

Usually, I write for others, but this piece is more so a reminder from me to me not to judge how others are handling social distancing, quarantines, and death. However, I’m sharing because I do hope in some way it also reminds us all that we’re each doing the best we can, considering our past backgrounds and current circumstances. Even though it may look a little different, we all seem to be in survival mode.

So, if you have some book suggestions to help me escape, add them in the comments below.

Parts were written for this essay published on The Mighty: How Reading is Helping Me Fight Through Feeling Powerless Over COVID-19.

What better way to start #womenshistorymonth than to tell you about a book my dope women colleagues @cbeach717 @katiedredger @cathyjets and I have worked on for two years? Stories of Sports is available now. We’ve covered a range of diverse topics and the ways media have excluded or manipulated specific narratives. 2 chapters focus on the history of mistreatment of female athletes and sportscasters. We have a foreword from @andraya_carter and a glowing review from @shelbiewitte ✍🏽✍🏼✍🏼✍🏼
Night owls watch the moon rise and embrace their shadow side.
So grateful that @tarraconnerjones stopped by my home on her way back to South Florida 💕 #relationshipmatters #symbioticrelationship #friendshipthings