The word perfect used to permeate every aspect of my life. My former best friend believed my hair to be a weave because it was “always so perfect.” I’ve written before about how other friends shut down criticisms of my husband because they perceived him as “Mr. Rogers,” a human symbol of perfection. People believe our marriage to be perfect. While we believe we’re perfect for one another, a flawless union is impossible.

Accusations of my perceived perfection used to anger me, until I began looking closer at myself.

I used to put on lipstick just to take the trash out. I used to think long and hard before I opened my mouth for fear of sounding flawed. One reason I used to make a 360-mile, round-trip drive to a job was to prove I was good enough to be at what’s considered one of the top research universities in Florida. My perfectionist’s status was unconsciously crafted and maintained for decades. 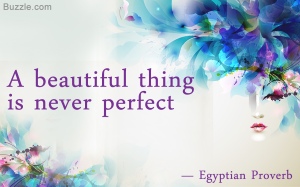 I didn’t realize it at the time, but one way I ceased portraying perfectionism was when I went natural. Wearing my hair in its natural state helped with accepting myself as is. I had no idea how my hair would look or what I would need to do to maintain it. I literally had to learn to love how I looked every day, because with natural hair, your hair never looks the same two days in a row. I grew accustomed to strangers’ looks. I didn’t know if they were going to praise my hair or stare and remain silent. This helped me accept my whole self, no matter what, releasing an image of perfection.

Another thing that’s been helpful is arriving in public spaces in so-called socially unacceptable ways. I’ve done this at varied levels. Last year, Dwight and I were out of town and headed to have a drink in the hotel lobby. I didn’t feel like changing back into my clothes, so I joined him in my red Valentine’s Day leggings, Western Michigan University alumni sweatshirt, and old, tattered boots. I’m not sure how he felt about how I looked, and I didn’t care. Years ago, I would’ve feared who may see me in such a state, but not now. Now, I couldn’t care less. What does it matter how I show up to have a drink in a hotel lobby?

A third practice that limits perfectionism for me is focusing on myself in the here and now, without comparison. Yoga helps. With yoga, the concept is to do your best that day, which can change from just the day before. This idea allows me to accept myself as is in each moment. Just because I did the bomb pigeon pose last week doesn’t mean it will occur today. Also, I cannot be focused on standing on one leg, while worrying about how high yours is. It…is…impossible. I will surely fall over. I know because I’ve tried. In some ways, this has carried over to my life off the mat. Fall ’17 students may have thought I was the best, but Spring ’18 may not. That’s something I would’ve fretted over in the past. Today, I know it’s okay, as long as I did my best both semesters. 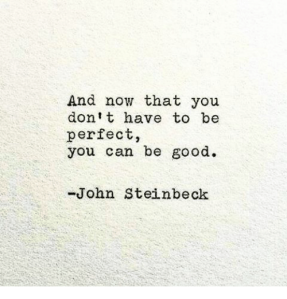 Another thing that’s helped me accept my less than perfect self is to be intentional about what I’m doing and to focus on the process. Before, I was unconsciously stacking up achievements in an effort to be perfect in my own and everyone else’s eyes. As of 2015 and about 95% of the time, I consciously began choosing experiences aligned with my core being and that will benefit others in some way. While I would like for each outcome to be favorable, I’m no longer tied to the actual product. No matter what my mother tried to teach me, I now realize a perfect/imperfect product does not reflect me. Instead, I’m happy knowing that I began with a positive intention and had fun doing something I enjoyed, which, no matter what, will always turn out well for everyone’s best interest.

So, what say you? Do you have any suggestions for de-perfecting your life? I’d love to hear them.