Summer of 1993 is when I became fully aware of my father’s abandonment. I remember the exact year because that’s when I started dating Dwight. That summer, he, my then best friend, Bobby, and I drove to Chicago for the weekend. I’d told my father that I would be home and that I was bringing these two important people with me. I wanted him to meet them.

That Saturday, I called and called, but he was nowhere to be found. I curled up in a ball in my great aunt’s back room and cried. I was twenty years old. Not only was I disappointed, but I was also embarrassed. I’d met Bobby’s parents a few months prior. Her father, though quiet, was in her life and supportive financially and emotionally. Likewise, I’d met Dwight’s parents, his father also seemed like a “normal” dad, making corny jokes and talking about his daily work.

All I wanted was for my father to show up when I came home and meet some friends. But it didn’t happen.

From that point forward, I was never sure how to interact with him, especially around made up societal holidays, like Father’s Day. Do I buy a card? None of the store-bought cards said what I wanted: thanks for being great the first sixteen years of my life. Wish we were closer. Hallmark doesn’t sell that one.

Maybe no gift and no card would send a stronger message. I mean it’s not like we’d spoken recently; he usually forgot my birthday, which was always about a month prior.

Most years, I’d opted for a generic card that said something like Happy Father’s Day. I’d sign it with no additional words.

This is one reason I felt motivated to create an edited collection of dysfunctional father-daughter stories. For a long time, I thought I was the only one who endured this angst. I really thought I was the only daughter sitting around a week or so before the holiday, wondering the best course of action for someone who’s supposed to care for you but doesn’t. 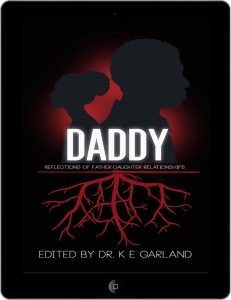 I felt alone in these feelings, until I wrote and published The Transition. Afterwards, women confided similar discord with their own fathers, and somehow that was comforting. Knowing I wasn’t the only one was like being embraced by a big collective online hug.

And I wanted other women and girls to feel the same. I wanted them to know they’re not alone during a holiday that makes us face our dysfunction even more.

That’s why I put this anthology together, and that’s why the eBook released the day before Father’s Day.

Paperbacks can be ordered here.

39 thoughts on “Daddy: Motivation for Creating a Book”