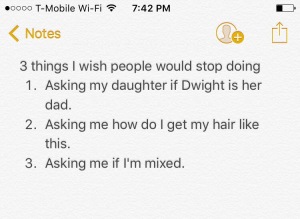 I’ve been holding this in for a while. I almost named this, “Things I Wish Black People Would Stop Asking Me,” but people of all races and ethnicities ask these questions. Here goes.

No one has ever asked me this question. I suspect because it’s rude. However, people have asked Desi. She’s a few shades darker than Dwight, Kesi, or me. And I guess this causes confusion. They’ve asked this her entire life. She’s 15. If it was just her peers, then I probably wouldn’t be upset. But it’s not. The people who typically inquire are…adults. Yes. Adults ask her all the time.

“You two must have different fathers?” a hairstylist once asked.

“You must be Dr. Garland’s daughter?” a colleague once asked Kesi.

To which Desi replied, “We’re both her daughter.”

Her friend’s mom asked, “He’s not your dad, right?”

Desi said that it doesn’t bother her. I halfway believe her. She is her father’s child; they both let things roll off their backs. But I do not. Sometimes my ego still drives the bus, and this is one topic that gets me going. If anyone ever asks, I have ready answers.

Have you ever heard of recessive genes?

You do know African Americans come in all shades, right? Sometimes those colors are reflected in the same family.

Your question doesn’t even make sense. You do realize this is my youngest daughter, right?

Q2: How do you get your hair like that?

This happens all the time. The most recent being a month or so ago. It’s usually a black woman, who follows up with, “I can’t get my hair to do that.” But this time a black, male cashier asked.

(snickers) “That’s what they all say!”

I’m not sure why people don’t always believe me. Is it because so many women wear weaves? Did you know they sell natural looking weaves and wigs? I had no idea. I digress. Here’s my point. If you have the wherewithal to ask someone how they get their hair to look like it does, then be accepting of the answer you’re given. Implying that a woman is lying is just offensive.

I identify as black. I was adopted and raised by a black family. Culturally, I’m black. It is common knowledge that in America one drop of blood means you’re black, still.

That’s my reply because it’s too long to offer the following transparency.

My biological grandparents are both half Cherokee. I know what you’re thinking. We all are. But, according to my grandfather, his and his wife’s mother were full-blood Native American. That part is evident in my cheekbones.

As far as my parents, I suppose it hurts too much to say, “I don’t know,” because I don’t.

When I met my biological aunt, she told me that my mother pointed out my father. He was indeed a “lanky, white man.” However, I haven’t gotten around to finding him and proving it. Until I do, I’d prefer that people just don’t ask.

The day before our anniversary, I’d thought I’d share the non-fairytale stuff.
Poetry is underrated. But if you’re looking to get back into it, I suggest bone, by @yrsadaleyward It’s raw and real.
Full essay on the blog. Link in bio.