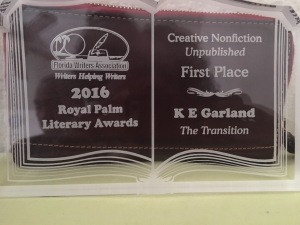 Remember that contest I told you all about? Well, I won! Initially, I was nervous sitting there listening to all the rules and stipulations about rubrics. When Chris Coward, the president of the Florida Writers Association read my name, I couldn’t believe I’d actually won first place for creative nonfiction.

“The Transition” is the story of how I shifted from bitterness to compassion for my father, while he shifted from life to death due to his cancer diagnosis.

I want to share it here, but cannot because I’ve submitted it for The Binge-Watching Cure, a paid book publication.

Instead of posting it, I want to tell you something I find odd.

In 1983, my mother had a kidney transplant. Consequently, at ten years old, I wrote a book called On the Farm. It was the story of a little boy whose dad had died. The boy had to learn how to take care of the farm and his family. My fifth grade teacher, Mrs. Patterson submitted it for a citywide competition, sponsored by Gwendolyn Brooks. Remember, I grew up in Chicago so this was a huge deal. My grandmother and I dressed up in church attire and attended. My mother was still in Madison, Wisconsin recovering from her transplant. I didn’t win. But 33 years later, I find it quite strange that I won a competition for a story I wrote about losing my own father.

Today, everything is still surreal. However, if I can say anything to all of you who read my words, it is this: Carpe Diem! That was the 2016 Florida Writers Association’s theme. Seize the Day! Do what you want! Live life and experience it however you see fit. And have faith that everything is working out for your highest good.