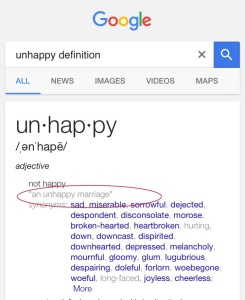 Did you notice that the example given is “an unhappy marriage”? Aside from this Googled definition, I’ve interviewed and written about twelve unhappy wives and here is what I’ve learned.

Are you voiceless? This is the first type of unhappy wife that I’ve grown to understand. Society quieted her. Sometimes it’s a mother who gave advice based on her own failed marriage. Sometimes there are passed-down, cultural practices the wife felt had to be followed. For example, Asian culture dictates that you marry and follow your husband’s lead. Sometimes the wife silences herself by holding her tongue about things she doesn’t think she can change, such as how much her in-laws are involved. Either way, I’ve learned that you might be unhappy if you feel that you cannot follow your intuition, speak freely or raise concerns about your marriage. Consequently, your mouth is closed, but the energy surrounding your unhappiness festers inside. This wife feels as if she cannot tell anyone about her woes, and even if she does, no one acknowledges or listens anyway.

Are you detached? There are many ways husbands and wives can be detached. The wife could be emotionally disconnected, like I was for a while, thus perpetuating a state of misery. A husband could be physically present but withholding intimacy, thus producing an unfulfilled home life. I’m not saying 100% of the marriage should be sexual, but how can two perfectly healthy people be happy if they’re not consummating their relationship with sex every now and then? Detachment can also come from wives who don’t know themselves. Stay with me as I explain. If the wife is separated from knowledge of herself, then how can she truly connect with her spouse? You might be an unhappy wife if you or your husband is disconnected in some way.

Are you committed? But kg, this doesn’t make sense? How can a wife be unhappy if she’s committed? It’s possible good people; it’s possible. Maybe the wife is committed to a marital situation that she never thought, in a million years would ever happen to her. The committed wife would never think to leave her husband. One reason is because she wants to see the marriage through. Another reason is because she loves her husband. You know? She takes the “in sickness and health” part of the vows very seriously. However, just because she’s committed doesn’t mean that she’s always happy. I mean, quite honestly, it takes some dedication, fortitude and downhill battles to remain married sometimes. You might be an unhappy wife if you’ve chosen to remain married through a specific tribulation.

Are you a voiceless, detached or committed wife? Do you know an unhappy wife, if so, then you or she might be interested in reading my upcoming book, The Unhappy Wife. It includes short stories based on real-life events of the above-described types of women. Order the eBook or paperback via my site: kegarland.com

This is what 26 years of L❤️VE can look like. We just happen to be married, too 😉
You know what’s really cool? When you DON’T have to teach people how to treat you, when you’re aligned and synchronized 💕
Went to visit our organic farming baby over @rodaleinstitute