A few years ago, I attended one of my former high school student’s baccalaureate graduations. Also in attendance was her mom, a single mother of three young adults. She had literally arrived just in time for this commencement, which was 706 miles away from home. She donned a black, sequenced matching shirt and pants. Her luggage was in tow. This scene was typical; she wore her challenges. As Langston Hughes might say, life for her ain’t been no crystal stair.

But still. No matter the situation, this lady was always there for her daughter and her other two adult children. She might be the loudest one in the crowd, but that was because she was supportive. She might have snuck some popcorn into so-called prestigious events, but that’s cause everybody knows that concessions at large events cost too much.

I watched her quite a bit that weekend. She snapped 27 pictures on her disposable camera. Tossed the throwaway in her bag and snatched a new one. She did this four more times. I watched her “save” the graduation chicken because essentially, nobody else there really knew how to grill it. And I noticed how she loved her children, the best way she knew how, given her experiences. By Sunday, Mother’s Day 2013, something dawned on me; this mother is no different than I am, a mother of two daughters, or any mother for that matter. So I posted this: The longer I am a mother, the more I understand that each mother just does the best she can, given her circumstances. 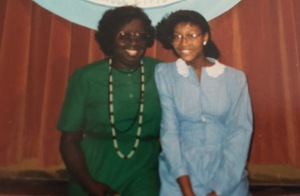 Then, something else happened. I thought about my own experiences as a daughter. Many times I felt embarrassed because my mother carried a terminal illness that would lead to death, kidney disease. A lot of times, I wished my mom were someone else. So much so that she had offered to take me to see Michael Jackson’s Victory Tour, but I declined. As much as I loved MJ, I didn’t want to be asked if this was my grandmother, again. It wasn’t until years after my mother’s death that I realized how much of a gem she really was.

In between dialysis treatments, she led a fearless life. She was deeply involved with NAPHT (National Association of Patients on Hemodialysis and Transplantation), volunteered as a Sunday school teacher, worked part-time, supported anyone she called family and friend, and all the while actively chose to raise me, this daughter she had adopted. My mother had ensured that I attend the best public magnet K-12 Chicago schools, which provided me with rich childhood experiences. In fact, I attribute my spirit of service, advocacy and motivation in part to observing my own mother do the very same things. So while there were moments of adolescent shame due to my mother’s physical appearance, there’s now an adult appreciation because I recognize and honor her for doing the best that she could, given her circumstances.

Now, I’m the mother of two fairly quiet teenage daughters, who would rather I remain silent than speak out about small infractions. These daughters turn a side-eye with every picture I capture and every post that “tells their business.” My oldest claims that she won’t tell me anything because I’ll tell everyone (guess this blog partially proves that). My youngest daughter would rather become invisible than to watch me dance in public. I’m often met with a lot of, “Are you wearing those shoes with that?” when leaving the house. But I hope that one day they’ll understand that it matters less if my shoes match my shirt. I hope that they’ll understand the reason their mother took a 320-mile commute every now and then for a career she felt called to do. I hope that they’ll remember family trips, game nights, healthy food, and movie dates. And when they’re feeling as if I could have done more, I hope they’ll remember that I too, did the best that I could, given my own circumstances.

64 thoughts on “Why I Refuse to Judge Any Mother”